What is Mister Ed about? 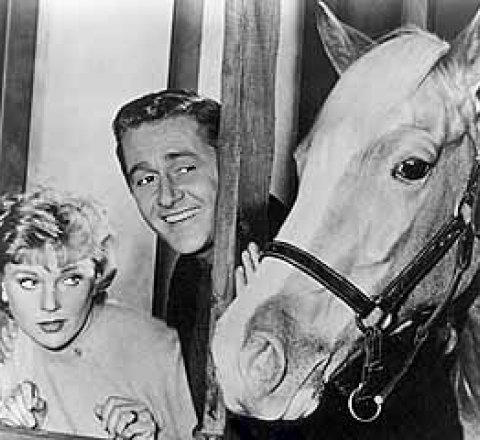 One of the most successful of the numerous 1960's nonsensical sitcoms was this one about a talking horse. Ed belonged to Wilbur Post, a young architect who had decided to move out of the city to get a little closer to nature. The rambling country home he and his wife decided upon came complete with a barn that doubled as Wilbur's office and a very talkative palomino named Ed. Problem was Ed didn't care to talk to just anyone, in fact he would only talk to Wilbur (the first human he'd ever met worth talking to). The confusion caused by having a talking horse, and the situations Ed got Wilbur into, and occasionlly out of, formed the stories.

Episode : Wonderful World of Wilbur Pope, The
Episode 1: Ed the Counterspy
Episode 2: Ed-a-Go-Go
Episode 3: Ed Sniffs Out a Cold Clue
Episode 4: Spies Strike Back
Episode 5: Love and the Single Horse
Episode 6: Anybody Got a Zebra?
Episode 7: TV or Not TV
Episode 8: The Horse and the Pussycat
Episode 9: Don't Skin That Bear
Episode 10: Ed the Bridegroom
Episode 11: Ed and the Motorcycle
Episode 12: Cherokee Ed
Episode 13: Ed Goes to College
click here to see where to watch