What is Andromeda about? 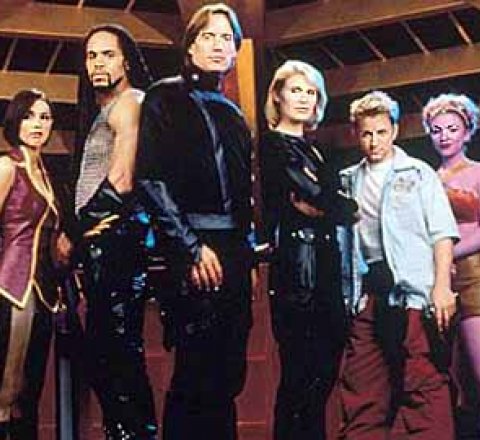 The Commonwealth spanned three galaxies and a myriad of cultures. Dylan Hunt, captain of the star ship Andromeda, was frozen in time and awoke three centuries later to find the Commonwealth had fallen. To fight back the chaos among the stars, Hunt must use the Andromeda to restore the Commonwealth and bring unity to the galaxy once again. He recruits a mercenary, Tyr Anasazi, and the crew of the Eureka Maru: Captain Beka Valentine, Engineer Seamus Harper, Physicist Rev Bem, and Medical Officer Trance Gemini. After discovering the Spirit of the Abyss and its powerful weapon, the Magog Worldship, the need for the Commonwealth is greater than ever. 50 member worlds are finally recruited, and the reconstruction of the Commonwealth is finally truly underway. More and more worlds sign on, contributing their fleets to protect each other. In the third season, Dylan and the crew travel from world to world as instructed by the Triumvirate, the leaders of the Commonwealth. But everything is building to the moment from one of his crew will betray him. The fourth year deals with the corruption of the Commonwealth after the recent betrayal. Things become more intense as the Andromeda is expelled from the Commonwealth, Trance reveals her true form, Harper holds a weapon capable of destroying the Commonwealth, Beka becomes possessed by the Spirit of the Abyss, and a new crew member joins. But the Magog Worldship is nearing, and the final confrontation is to protect a Utopian society from it.

Episode : Answers Given to Questions Never Asked
Episode 1: Answers Given to Questions Never Asked (2)
Episode 2: Pieces of Eight
Episode 3: Waking the Tyrant's Device
Episode 4: Double or Nothingness
Episode 5: Harper/Delete
Episode 6: Soon the Nearing Vortex (1)
Episode 7: The World Turns All Around Her (2)
Episode 8: Conduit to Destiny
Episode 9: Machinery of the Mind
Episode 10: Exalted Reason, Resplendent Daughter
Episode 11: The Torment, the Release   (watch here)
Episode 12: The Spider's Stratagem
Episode 13: The Warmth of an Invisible Light
Episode 14: The Others
Episode 15: Fear Burns Down to Ashes
Episode 16: Lost in a Space that Isn't There
Episode 17: Abridging the Devil's Divide
Episode 18: Trusting the Gordian Maze   (watch here)
Episode 19: A Symmetry of Imperfection
Episode 20: Time out of Mind
Episode 21: The Dissonant Interval (1)
Episode 22: The Dissonant Interval (2)