What is Star Trek about? 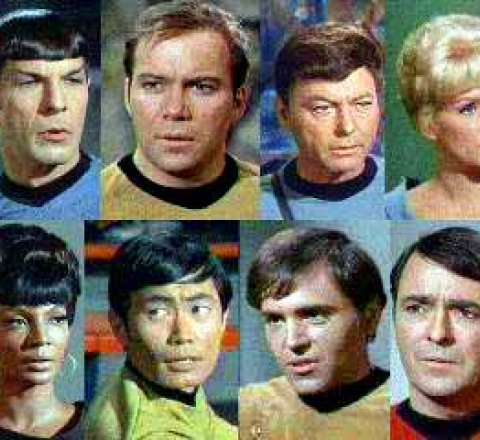 Star Trek was an influential science fiction television series created by Gene Roddenberry that followed the adventures of the crew of the starship U.S.S. Enterprise. The show began with the production of the 1964 pilot "The Cage". "The Cage" featured Jeffrey Hunter as Enterprise captain Christopher Pike. The pilot was rejected by NBC executives as being too cerebral. In order to demonstrate the action-adventure potential of the series, another pilot entitled "Where No Man Has Gone Before" was produced. Replacing Jeffrey Hunter as Enterprise captain was William Shatner who starred as Captain James T. Kirk. The new pilot also starred Leonard Nimoy as Mr. Spock who was the only character to return from the original pilot after NBC's rejection of "The Cage". Response to the second, action-oriented, pilot was good and NBC gave the go ahead to the series. The series premiered on NBC on Thursday, September 8, 1966 in the 8:30-9:30 PM timeslot with the episode "The Man Trap". Critical response to the series was mixed and rating were lower than expected. In its second season, reoccurring guest star DeForest Kelley was added to the series' starring cast and the show was moved to Friday at 8:30. A decline in the ratings, however, prompted NBC to attempt to cancel the series after its second season, but a letter writing campaign by die hard fans of the show saved it from cancellation. An additional season of episodes were produced, but ratings continued to decline most likely due to the quality of the third season episodes and a bad 10:00 PM Friday night time slot. Despite another letter writing campaign, the series was finally cancelled after its third season. The last new episode "Turnabout Intruder" was shown on June 3, 1969. After its three year run Star Trek began running syndication where it was discovered by legion of new fans and became a phenomenon. The show inspired six features films, an animated series, and four additional spin-off television shows. Other spin-off's include novels, comic books, merchandise and an enormous amount of fan-fiction based on the series. Despite its short network run, Star Trek has become one of the most successful shows in television history. Aside from its three main stars, Star Trek featured a large cast of reoccurring guest stars that includes James Doohan, Nichelle Nichols, George Takei, Walter Koenig, Majel Barrett, and Grace Lee Whitney. Other notable guest stars include Diana Muldaur, Gary Lockwood, Ricardo Montalban, Sally Kellerman, Julie Newmar, Frank Gorshin, John Colicos, Roger C. Carmel, William Campbell, Ted Cassidy, Michael Ansara and Elisha Cook, Jr. Notable writers for the series include Gene Roddenberry, Gene L. Coon, George Clayton Johnson, Jerry Sohl, Jerome Bixby, Robert Bloch, Theodore Sturgeon, Harlan Ellison, David Gerrold, and D.C. Fontana.

Episode : Operation: Annihilate!
Episode 1: The Man Trap
Episode 2: Charlie X
Episode 3: Where No Man Has Gone Before
Episode 4: The Naked Time
Episode 5: The Enemy Within
Episode 6: Mudd's Women
Episode 7: What Are Little Girls Made Of?
Episode 8: Miri
Episode 9: Dagger of the Mind
Episode 10: The Corbomite Maneuver
Episode 11: The Menagerie (1)
Episode 12: The Menagerie (2)
Episode 13: The Conscience of the King
Episode 14: Balance of Terror
Episode 15: Shore Leave
Episode 16: The Galileo Seven
Episode 17: The Squire of Gothos
Episode 18: Arena
Episode 19: Tomorrow is Yesterday
Episode 20: Court Martial
Episode 21: The Return of the Archons
Episode 22: Space Seed
Episode 23: A Taste of Armageddon
Episode 24: This Side of Paradise
Episode 25: The Devil in the Dark
Episode 26: Errand of Mercy
Episode 27: The Alternative Factor
Episode 28: The City on the Edge of Forever
Episode 29: Operation -- Annihilate!