What is Traders about? 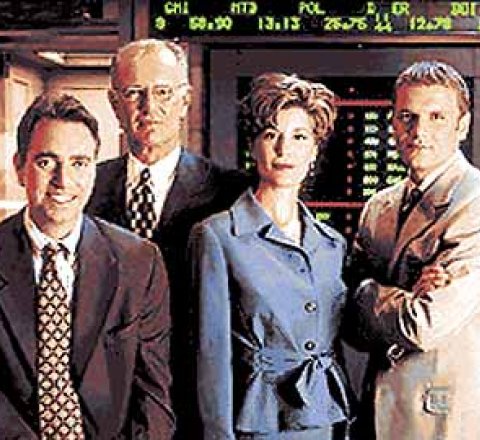 Traders was a terrific show created by Atlantis (now Alliance Atlantis) about the lives and goings on at Gardner/Ross, a commercial Investment Bank. (Can you say esoteric) The show used many investing terms and was seen as confusing by many. The program however won countless awards all over the world, and enjoyed a successful run of five years. Interestingly enough Gardner/Ross is a combination of One man's name, and his character. David Gardner & Cedric Ross, thus the bank name Gardner/Ross

Episode 1: Options
Episode 2: Pennies From Heaven
Episode 3: Bad Is Good
Episode 4: The King is Dead...
Episode 5: ...Long Live The King
Episode 6: From Russia With Love
Episode 7: Dancing With Mr. D.
Episode 8: Into That Good Night
Episode 9: Rumours
Episode 10: The Enemy Within
Episode 11: Sharper Than A Serpent's Tooth
Episode 12: The Big Picture
Episode 13: The Enemy Without

Episode 1: Episode One
Episode 2: Career Opportunities
Episode 3: Getting Lucky
Episode 4: Solitary Consignment
Episode 5: Budding Prospects
Episode 6: It's a Family Affair
Episode 7: Scents and Sensibilities
Episode 8: Hawks
Episode 9: The Running of the Bulls
Episode 10: Someone to Watch over Me
Episode 11: Money Shot
Episode 12: The One You Bury
Episode 13: Nice Guys Finish Last
click here to see where to watch