What is Big Wolf on Campus about? 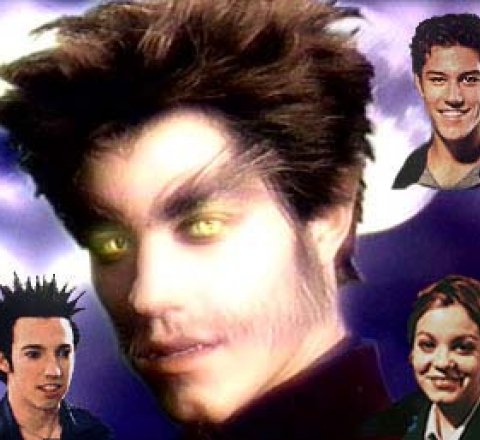 Big Wolf on Campus is about star football player, Tommy Dawkins, who was bitten by a werewolf and has transformed into one. He has problems with fleas and during certain events, he can change into a werewolf immediately without any control. Not only that, he has to battle vampires, cat women, ghosts, and zombies. On his side to help, are his best friends, Merton J. Dingle and Lori Baxter. All this can happen and more in his hometown, Pleasantville. THOMAS P. DAWKINS Tommy was just a regular all-star football player in High School, trying to pursue his football career, but his life changed when he is bitten by a werewolf, and becomes a werewolf himself. Unlike others, Tommy is a good-natured werewolf who protects the citizens of Pleasantville. With his good friend Merton and Lori, he battles all kinds of creatures, monsters, and aliens roaming around the town. Tommy transforms when hurt or when he gets emotional, including guilt. And you can't forget the occasional full moon.

Season 1 of Big Wolf on Campus

Season 2 of Big Wolf on Campus

Season 3 of Big Wolf on Campus

Episode 1: Stone Free
Episode 2: Everybody Fang Chung Tonight
Episode 3: I Dream Of Becky
Episode 4: Stormy Weather
Episode 5: Being Tommy Dawkins
Episode 6: Hellection
Episode 7: Save The Last Trance
Episode 8: Anti-Claus Is Coming To Town
Episode 9: N'Sipid
Episode 10: Very Pale Rider
Episode 11: Play It Again, Samurai
Episode 12: Dances Without Wolves
Episode 13: Baby On Board
Episode 14: The Boy Who Tried Wolf
Episode 15: The Mertonator
Episode 16: What's Vlud Got To Do With It?
Episode 17: There's Something About Lori
Episode 18: Switch Me Baby One More Time
Episode 19: What's The Story, Mourning Corey
Episode 20: Thanks
Episode 21: A Clip Show: The Sum Of All Fears
click here to see where to watch