What is Captain Nice about? 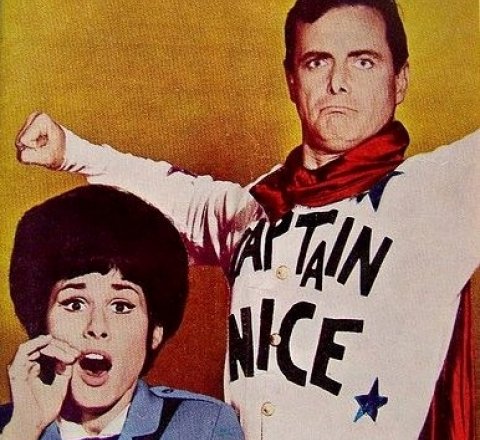 Carter Nash was a chemist in a police department who discovered a liquid which could turn him into Captain Nice, an odd sort of superhero: very shy and dominated by his mother. Captain Nice flew (he feared heights) in his tattered leotards, fighting badguys because his mother told him to do so.

Episode 1: The Man Who Flies Like a Pigeon
Episode 2: How Sheik Can You Get?
Episode 3: That Thing
Episode 4: That Was the Bridge that Was
Episode 5: The Man With Three Blue Eyes
Episode 6: Is Big Town Burning?
Episode 7: Don't Take Any Wooden Indians
Episode 8: That's What Mothers Are For
Episode 9: Whatever Lola Wants
Episode 10: Who's Afraid of Amanda Woolf?
Episode 11: The Week They Stole Payday
Episode 12: Tastes OK But Something's Missing
Episode 13: May I Have the Last Dance?
Episode 14: One Rotten Apple
Episode 15: Beware of Hidden Prophets
click here to see where to watch