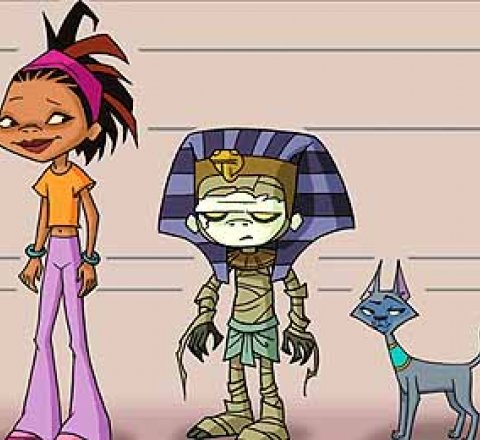 King Tut-ankh-en-set-amun was revived when lightning hit a very old Egyptian casket in a museum The Pharaoh was in charge of the 10 year old mummy. King Tut may not be so tall, but his personality is very big. So big that he believes he is the ultimate leader the world he is currently living in. Tut meets up with a 12 year old girl, Cleo, and his trusty companion, Luxor. Watch him as he sets out to recover his rightful place in the world. Characters Tutenstein: Tutenstein is a 10-year old mummy, who was brought back to life when lightning hit his coffin. He believes he is still the ruler because he was a Pharaoh three thousand years ago. Will he be able to go about his life as he did then, with the help of his friends Cleo and Luxor? Cleo: Cleo is sort of Tutenstein's keeper. She is twelve years old and always keeping King Tut safe. Cleo Carter vowed never to expose the concealed secret of Tutenstein. Luxor: Luxor belongs to Cleo. He is also Tutenstein's t

Episode 1: The Awakening
Episode 2: Curse of the Pharaoh
Episode 3: Clash of the Shabtis
Episode 4: I Did It My Way
Episode 5: The Boat of Millions of Years
Episode 6: The Powerful One
Episode 7: There's Something About Natasha
Episode 8: King of Memphis
Episode 9: Roommates
Episode 10: Ghostbusted
Episode 11: Near Dead Experience
Episode 12: The Unsafety Zone
Episode 13: Happy Coronation Day, Tutenstein

Episode : Irresistibly You
Episode 1: The Come Back Kid
Episode 2: Rest in Pieces
Episode 3: Irresistible you
Episode 4: Sleepless in Sarcophagus
Episode 5: The Truth Hurts
Episode 6: Was Not Was
Episode 7: Tut the Defender
Episode 8: Spells and Sleepovers
Episode 9: Fearless
Episode 10: UnPharaoh
Episode 11: Into the Past
Episode 12: Tut's Little Problem
Episode 13: Keep Your Wandering Eye to Yourself
click here to see where to watch