What is Bewitched about? 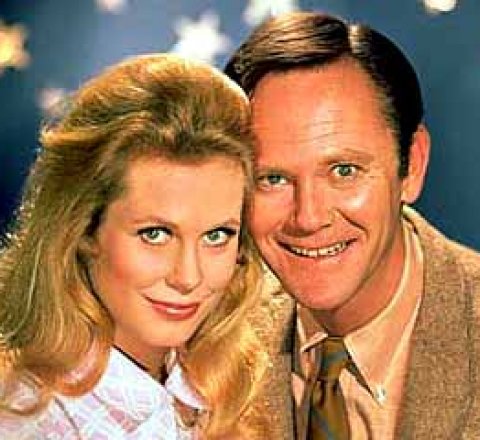 The long-running ABC sitcom Bewitched starred Elizabeth Montgomery as Samantha Stephens, a pert, perky, suburban housewife who happened to be a genuine witch, with all the usual magical powers. Samantha was married to Darrin Stephens (played during the first five seasons by Dick York, and in the final three seasons by Dick Sargent), a rising young advertising executive who worked at the New York firm of McMahon and Tate. A mere mortal, Darrin insisted that Samantha -- or "Sam," as he called her -- behave like an ordinary human being, and that she keep her witchcraft under wraps at all times. Sam tried her best to oblige, but the situations occurring in the course of the series invariably required her to cast a few spells and chant a few incantations to get her husband or herself out of jams.

Episode 1: Long Live the Queen
Episode 2: Toys in Babeland
Episode 3: Business, Italian Style
Episode 4: Double, Double, Toil and Trouble
Episode 5: Cheap, Cheap
Episode 6: No Zip in My Zap
Episode 7: Birdies, Bogies, and Baxter
Episode 8: The Safe and Sane Halloween
Episode 9: Out of Sync, Out of Mind
Episode 10: That Was No Chick, That Was My Wife
Episode 11: Allergic to Macedonian Dodo Birds
Episode 12: Samantha's Thanksgiving to Remember
Episode 13: Solid Gold Mother-in-Law
Episode 14: My, What Big Ears You Have
Episode 15: I Get Your Nanny, You Get My Goat
Episode 16: Humbug Not to Be Spoken Here
Episode 17: Samantha's Da Vinci Dilemma
Episode 18: Once in a Vial
Episode 19: Snob in the Grass (1)
Episode 20: If They Never Met (2)
Episode 21: Hippie, Hippie, Hooray
Episode 22: A Prince of a Guy
Episode 23: McTavish
Episode 24: How Green Was My Grass
Episode 25: To Twitch or Not to Twitch
Episode 26: Playmates
Episode 27: Tabitha's Cranky Spell
Episode 28: I Confess
Episode 29: A Majority of Two
Episode 30: Samantha's Secret Saucer
Episode 31: The No-Harm Charm
Episode 32: Man of the Year
Episode 33: Splitsville