What is Tour of Duty about? 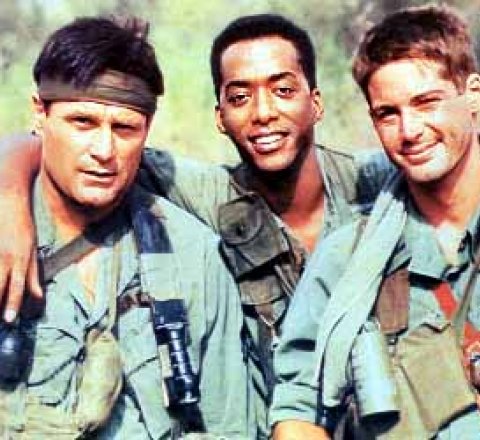 As the first television drama series about the Vietnam War, Tour of Duty focuses on a single platoon of young U.S. soldiers through their one-year tour of combat duty in Vietnam during the late 1960's. While their own country is rocked by a massive anti-war movement, these young men find themselves thrown into combat in Southeast Asia, where they face enemy troops they can not see and sometimes can not kill. They also face their own fears, as they struggle in a hostile environment just to keep themselves and their fellow soldiers alive. Terence Knox, Kevin Conroy, Stephen Caffrey, Joshua Maurer, Steve Akahoshi, Tony Becker, Eric Bruskotter, Stan Foster, Ramon Franco and Miguel A. Nunez, Jr. star as the infantrymen who represent diverse racial, cultural and philosophical backgrounds but must ultimately depend on one another to get through the war alive.

Season 1 of Tour of Duty

Season 2 of Tour of Duty

Season 3 of Tour of Duty

Episode : Long Road to Binh
Episode : The Making of Tour of Duty
Episode : Back to the Jungle
Episode : The Final Mission
Episode 1: The Luck
Episode 2: Doc Hock
Episode 3: The Ties That Bind
Episode 4: Lonely at the Top
Episode 5: A Bodyguard of Lies
Episode 6: A Necessary End
Episode 7: Cloud Nine
Episode 8: Thanks for the Memories
Episode 9: I Am What I Am
Episode 10: World in Changes
Episode 11: Green Christmas
Episode 12: Odd Man Out
Episode 13: And Make Death Proud to Take Us
Episode 14: Dead Man Tales
Episode 15: Road to Long Binh
Episode 16: Acceptable Losses
Episode 17: Vietnam Rag
Episode 18: War is a Contact Sport
Episode 19: Three Cheers for the Orange, White & Blue
Episode 20: The Raid
Episode 21: Payback
click here to see where to watch