What is Meerkat Manor about? 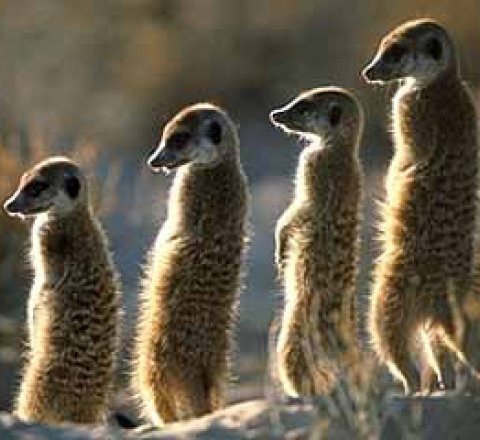 Animal Planet's series Meerkat Manor follows the Whiskers, a family of meerkats, that struggles to survive in Africa's Kalahari Desert. The series was filmed over the course of a 10-year period for a Cambridge University study. Meerkat Manor is narrated by Bill Nighy in the United Kingdom, Mike Goldman in Australia, and Sean Astin in the United States.

Episode : The Calm Before The Strom
Episode 1: A Family Affair
Episode 2: Love Thy Neighbor
Episode 3: Some Like It Hot
Episode 4: Revolution
Episode 5: Childhood's End
Episode 6: Boys Will Be Boys
Episode 7: Divided Loyalties
Episode 8: The Good, the Bad and the Desperate
Episode 9: Daisy's Choice
Episode 10: Flower Power
Episode 11: An Awfully Big Adventure
Episode 12: The Calm Before the Storm
Episode 13: Moving On

Episode : The Mark of Zorro
Episode 1: To Have and To Have Not
Episode 2: All Manor of Love
Episode 3: Rising Star
Episode 4: The Family Way
Episode 5: The Mask of Zorro
Episode 6: Great Expectations
Episode 7: The Bodyguard
Episode 8: Divided We Fall
Episode 9: To The Manor Born
Episode 10: The Birds
Episode 11: The Rovers Return
Episode 12: Home Alone
Episode 13: The Darkest Day
click here to see where to watch