What is Big Shots about? 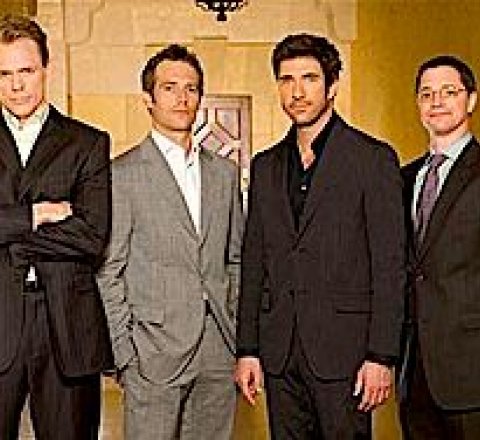 Big Shots is a drama from Warner Brothers Television and ABC about four friends who are up and coming executives. James is played by Michael Vartan and is the "moral center" of the group. He's married to Stacey, and they've been together since freshman year in college, but their marriage is in trouble. He just found out she was having an affair with his late boss. He relies on his "work wife", Katie, played by Nia Long, to keep him focused in the office. Dylan McDermott plays Duncan Collinsworth. a cosmetics CEO. He's divorced from Lisbeth, played by Paige Turco, but things aren't completely over. Even though he still seems interested, she knows if she took him back he'd lose interest immediately. They have a 19 year old daughter Cameron (Peyton List), who resents her father for walking out on them. Christopher Titus plays Brody, a married graduate of Harvard Business School, who spends more time trying to make his wife happy than running his business. Joshua Malina plays Karl. He's married to Wendy, played by Amy Sloan. They are seeing a marriage counselor, but he has a secret mistress on the side, Marla, played by Jessica Collins. What is he going to do when Marla and Wendy become friends? More than business associates, these four men are best friends who will be there for each other no matter what.

Episode : Pilot
Episode : Tall, Dark and Hairless
Episode : Who's Your Daddy?
Episode 1: Alpha Males
Episode 2: Tall Dark and Hairless
Episode 3: The Good, The Bad, and the Really Ugly
Episode 4: Three's a Crowd
Episode 5: Greatest Amerimart Hero
Episode 6: Car Trouble
Episode 7: Who's Your Daddy
Episode 8: The Way We Weren't
Episode 9: The Better Man
Episode 10: Sex Be Not Proud
Episode 11: Who's the Boss
click here to see where to watch