What is Going Tribal about? 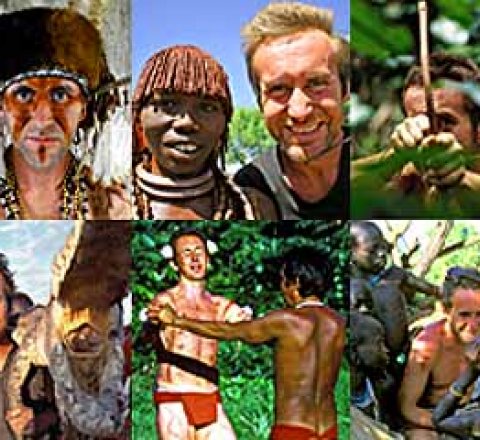 Going Tribal follows former Royal Marine and expedition leader Bruce Parry as he tests the physical limits of living with ancient tribes in some of the world's most remote areas.Parry sheds social trappings (and sometimes his Western clothes) by living alongside people from the virtually unexplored areas of the Himalayas, Ethiopia, West Papua, Gabon and Mongolia. To the degree possible, while spending a month immersed in each society, Parry also tries to adopt the methods and practices of his hosts.Parry enthusiastically embraces jungle hunting and the rituals of the warrior, being taught by strangers how to survive using bows, arrows, blowpipes, dogs, spears, traps, snares and clubs. He must cook and eat his catch using traditional methods such as hot stones, waxy leaves and bamboo pots.Parry is accompanied by a translator, but learns the basics of tribal language. The series is accompanied by subtitles. Viewers hear unique languages and watch the sometimes-graphic practic

Episode 1: Hunting with the Jaguar Tribe
Episode 2: Nomads of the Siberian Tundra
Episode 3: Lost Island of Anuta
Episode 4: Life in the African Bush: The Akie
Episode 5: Journey to the Clouds: Bhutan
Episode 6: Ghosts of the Forest
click here to see where to watch