What is Captain Star about? 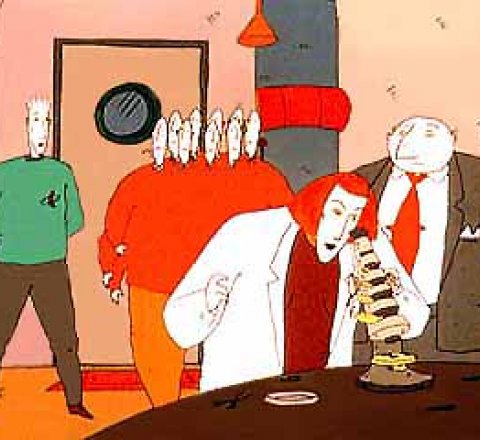 This could possibly be one of the greatest, most silliest cartoons of our time....of ALL time! Take a look and meet Jones, Sputnik, Nav. Black, 1st Officer Scarlet, & last but not least, the hero, Capt. Star. Other characters like the 3-eyed bounty hunter Jasper quilt, Phony pilot, Bloater (Bladder, Blister, What was his name?), & even A Teddy Bear army add humour & adventure to each episode!. "And they thought that I was dead, But I came out with a multiplied head.... Nine heads in all !!!" Bios Captain Star- One of the greatest heroes of ALL time & a universally known character of justice. He is the leader of the "Boiling Hell" crew & has accomplished thousands of missions such as the famous "29 captain's rescue". He awaits his orders from Mission control to this very day hoping that he will battle across the galaxy.......once again. 1st Officer Scarlet- An excellent professor of biology & a great officer aswell (Hence, The name). She has the skill to becom

Episode 1: The Atomic Alarm Clock
Episode 2: Day of the Zooties
Episode 3: The Worm Turns
Episode 4: No Future
Episode 5: Nine Heads Are Better Than One
Episode 6: Waiting for Sputnik

Episode 1: Rocket to Nowhere
Episode 2: It's Written in the Stars
Episode 3: Ned Nova
Episode 4: The Gravity of the Situation
Episode 5: The Collector
Episode 6: The Edge of the Universe
Episode 7: A Galaxy of Stars
click here to see where to watch