What is Monkey about? 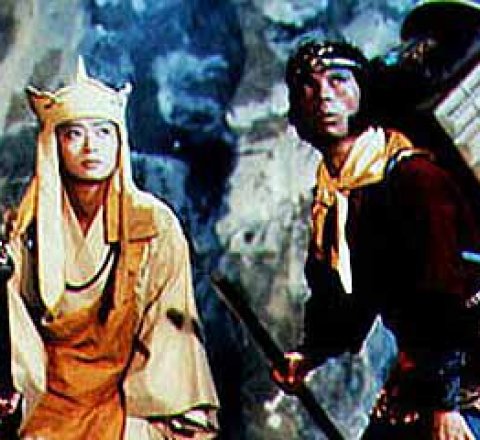 Monkey is based on the 16th century Chinese story "Hsi Yu Chi" ("Journey To The West"). It tells the story of the Buddhist priest Tripitaka, and his three disciples Monkey, Pigsy, and Sandy, as they travel from China to India to fetch the Buddhist scriptures. They have been sent by Buddha, and getting these scriptures will bring peace to the people of the world. Dubbed into English and shown in November 16, 1979 on UK and later Australian television, it proved to be quite popular.

Episode 1: Monkey Goes Wild about Heaven
Episode 2: Monkey Turns Nursemaid
Episode 3: The Great Journey Begins
Episode 4: Monkey Swallows the Universe
Episode 5: The Power of Youth
Episode 6: Even Monsters Can be People
Episode 7: The Beginning of Wisdom
Episode 8: Pigsy Woos a Widow
Episode 9: What Monkey Calls the Dog-Woman
Episode 10: Pigsy's in the Well
Episode 11: The Difference Between Night & Day
Episode 12: Pearls Before Swine
Episode 13: The Minx and the Slug
Episode 14: Catfish, Saint and the Shape-Changer
Episode 15: Monkey Meets the Demon Digger
Episode 16: The Most Monstrous Monster
Episode 17: Truth and the Grey Gloves Devil
Episode 18: Land for the Locusts
Episode 19: The Vampire Master
Episode 20: Outrageous Coincidences
Episode 21: Pigsy, King and God
Episode 22: Village of the Undead
Episode 23: Two Little Blessings
Episode 24: The Fires of Jealousy
Episode 25: The Country of Nightmares
Episode 26: The End of the Way

Episode 1: Pigsy's Ten Thousand Ladies
Episode 2: The Dogs of Death
Episode 3: You Win Some, You Lose Some
Episode 4: Pigsy Learns A Lesson
Episode 5: The Land With Two Suns
Episode 6: The House of the Evil Spirit
Episode 7: Am I Dreaming?
Episode 8: The Tormented Emperor
Episode 9: Between Heaven and Hell
Episode 10: The Foolish Philosopher
Episode 11: Who Am I?
Episode 12: What is Wisdom?
Episode 13: The Fountain of Youth
Episode 14: Better The Demon You Know
Episode 15: A Shadow So Huge
Episode 16: Keep on Dancing
Episode 17: Give and Take
Episode 18: Such a Nice Monster
Episode 19: The Fake Pilgrims
Episode 20: Pretty as a Picture
Episode 21: Mothers
Episode 22: The Tenacious Tomboy
Episode 23: Stoned
Episode 24: Hungry Like The Wolf
Episode 25: Monkey's Yearning
Episode 26: At the Top of the Mountain
click here to see where to watch