What is The Real McCoys about? 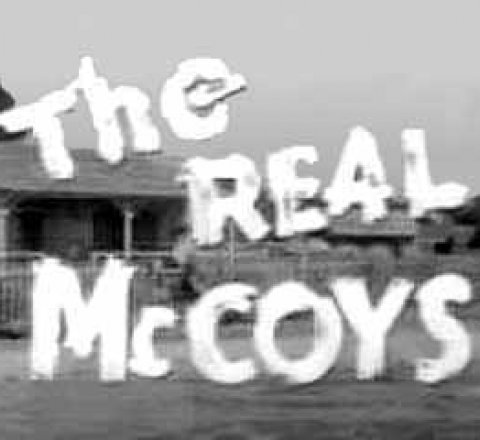 The McCoy family moves from the mountains of West Virginia to California's San Fernando Valley. The leader of the clan is Grampa--a cranky old geezer with a distinctive voice and gait--but underneath it all, he has a heart of gold. Living with him are his grandson, Luke, and Luke's bride, Kate. Due to the death of Luke's parents, these three adults are raising Luke's teenage sister, Hassie, and his younger brother, Little Luke. Walter Brennan is Amos, head of a West Virginia clan on a California ranch, in a popular sitcom that paved the way for such rural hits as `The Beverly Hillbillies' and `The Andy Griffith Show.' Amos is the granddad who `roars like a lion but [is] gentle as a lamb,' sharing his wisdom with kin like grandson Luke and daughter-in-law Kate, and the farmhand Pepino.

Season 1 of The Real McCoys

Episode 1: Californy, Here We Come
Episode 2: Luke Gets His Freedom
Episode 3: Grampa's Date
Episode 4: Kate's Dress
Episode 5: The Egg War
Episode 6: You Can't Cheat an Honest Man
Episode 7: Grampa Sells His Gun
Episode 8: A Question of Discipline
Episode 9: It's a Woman's World
Episode 10: Little Luke's Education
Episode 11: You're Never Too Old
Episode 12: The Matchmaker
Episode 13: The Lady's Man
Episode 14: The Fishing Contest
Episode 15: Time to Retire
Episode 16: Gambling Is a Sin
Episode 17: The Goodys Come to Town
Episode 18: The Bigger They Are
Episode 19: It Pays to Be Poor
Episode 20: New Doctor in Town
Episode 21: Let's Be Buddies
Episode 22: Grampa and the Driver's License
Episode 23: Luke's Mother-in-Law
Episode 24: The Homeymoon
Episode 25: Grampa's Proposal
Episode 26: Grampa's Brithday
Episode 27: Once There was a Traveling Saleswoman
Episode 28: My Favorite Uncle
Episode 29: Volunteer Fire Department
Episode 30: For Love or Money
Episode 31: Kate's Career
Episode 32: When a Fellow Needs a Friend
Episode 33: The Life of the Party
Episode 34: Three Is a Crowd
Episode 35: The New Look
Episode 36: You Can't Always Be a Hero
Episode 37: The Homely Boy
Episode 38: The Corn Eating Contest
Episode 39: Her Flaming Youth

Season 2 of The Real McCoys

Season 3 of The Real McCoys

Episode 1: The Farmer Took a Wife
Episode 2: The Game Warden
Episode 3: The Screen Test
Episode 4: Work No More, My Lady
Episode 5: The Garden Club
Episode 6: The Weaker Sex?
Episode 7: The Fighter and the Lady
Episode 8: The Gas Station
Episode 9: Grampa Fights the Air Force
Episode 10: The Girls at Mom's Place
Episode 11: The Politician
Episode 12: Pepino Takes a Bride
Episode 13: Hot Rod
Episode 14: The Ghostbreakers
Episode 15: The Marriage Broker
Episode 16: How to Build a Boat
Episode 17: The Artist
Episode 18: The Perfume Salesman
Episode 19: The Television Set
Episode 20: The Lawsuit
Episode 21: The Town Councilman
Episode 22: Cousin Naomi
Episode 23: The Bowling Champ
Episode 24: The Talk of the Town
Episode 25: Once There Was a Man
Episode 26: Weekend in Los Angeles
Episode 27: First Date
Episode 28: How To Discover Oil
Episode 29: A House Divided
Episode 30: Foreman of the Jury
Episode 31: One for the Money
Episode 32: That Was No Lady
Episode 33: The Tycoon
Episode 34: Where There's a Will
Episode 35: The Jinx
Episode 36: The Delagates
Episode 37: The Gigolo
Episode 38: Teenage Wedding
Episode 39: McCoys, Ahoy

Season 4 of The Real McCoys

Season 5 of The Real McCoys

Season 6 of The Real McCoys