Watch The Name of the Game online

What is The Name of the Game about? 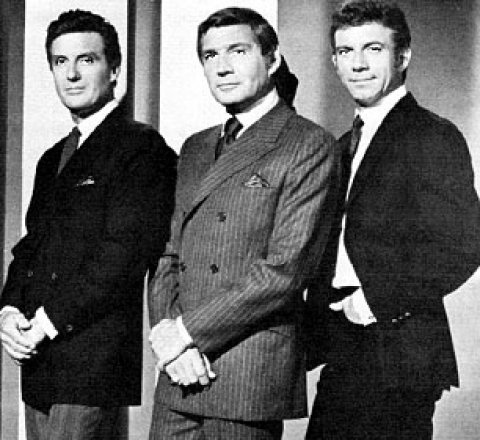 he Name of the Game was actually three series under one title. Each of the three stars of the show, Gene Barry, Robert Stack and Tony Franciosa were featured in their own self-contained episodes. The connection between them was Howard Publications, a Los Angeles based publishing empire that had been built up from scratch by its dynamic owner, Glenn Howard. Howard's position of power, his confrontations with business and political enemies, and his own flamboyant lifestyle were portrayed in his portion of The Name of the Game. Within the Howard empire were investigative correspondent Jeff Dillon and editor Dan Farrell. Dillon was a super-agressive former newsboy who had clawed his way up to a position of power and respect working for Howard's People Magazine. Farrell was a former FBI agent who had gone into the publishing business because it provided a position from which to make the public aware of the threats posed by organized crime.

Season 1 of The Name of the Game

Season 2 of The Name of the Game

Episode 1: Lady On the Rocks
Episode 2: A Hard Case of the Blues
Episode 3: Blind Man's Bluff
Episode 4: The Emissary
Episode 5: Chains of Command
Episode 6: Goodbye Harry
Episode 7: Give Till It Hurts
Episode 8: The Perfect Image
Episode 9: The Prisoner Within
Episode 10: The Civilized Men
Episode 11: High Card
Episode 12: The Power
Episode 13: Laurie Marie
Episode 14: The Tradition
Episode 15: The Brass Ring
Episode 16: Island of Gold and Precious Stones
Episode 17: The Takeover
Episode 18: The Garden
Episode 19: Tarot
Episode 20: The King of Denmark
Episode 21: The Skin Game
Episode 22: Man of the People
Episode 23: Echo of a Nightmare
Episode 24: Jenny Wilde Is Drowning
Episode 25: One of the Girls in Research
Episode 26: The Other Kind of Spy

Season 3 of The Name of the Game

Episode : So Long, Baby, And Amen
Episode 1: So Long Baby, and Amen
Episode 2: A Love To Remember
Episode 3: Cynthia Is Alive and Living in Avalon
Episode 4: Battle at Gannon's Bridge
Episode 5: The Enemy Before Us
Episode 6: The Time Is Now
Episode 7: The War Merchants
Episode 8: Little Bear Died Running
Episode 9: All the Old Familar Faces
Episode 10: I Love You, Billy Baker (1)
Episode 11: I Love You, Billy Baker (2)
Episode 12: Why I Blew Up Dakota
Episode 13: Aquarius Descending
Episode 14: The Glory Shouter
Episode 15: A Sister From Napoli
Episode 16: Los Angeles 2017
Episode 17: The Man Who Killed A Ghost
Episode 18: Seek and Destroy
Episode 19: A Capitol Affair
Episode 20: The Savage Eye
Episode 21: Appointment in Palermo
Episode 22: Beware of the Watchdog
Episode 23: The Broken Puzzle
Episode 24: The Showdown
click here to see where to watch