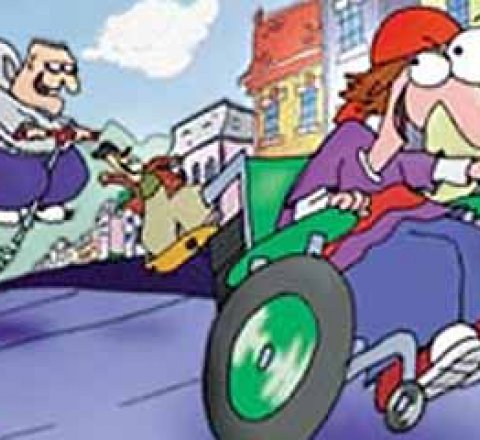 Welcome to the Pelswick guide at TV Tome. Pelswick Eggert is a 13-year-old 8th grader with a sharp tongue, a healthy suspicion of authority and a complete lack of fear. Oh yeah, and he uses a wheelchair because he has no feeling below his armpits. But the point is that Pelswick is just like any other 13-year-old when it comes to being independent, disaster-prone, mixed-up, and plugged into everyday pop culture. Pelswick's home life is dominated by his fiercely-protective (and totally insane) Gram-Gram, as well as his politically correct father Quentin, who will go to any length to avoid offending anyone. ("Nobody's wrong, they're just differently right!") Also in the picture are precocious younger sister Kate, and little brother Bobby, who says exactly one word per episode. At school, Pelswick's life is made miserable by bully Boyd Scullarzo, and Boyd's none-too-bright sidekicks Nick and Joe. Boyd is truly dedicated to the art of bullying; he's announced publicl

Episode : Hear No Evil, P.C. No Evil
Episode : Kick Me Kate
Episode : Invasion of the Buddy Snatchers
Episode 1: Eggertgeddon
Episode 2: Wheeldini
Episode 3: The Birdboy of Alcatraz
Episode 4: Boyd, Here Comes The Flood
Episode 5: It Must Be The Shoes
Episode 6: Oh Bully, Where Art Thou?
Episode 7: The Case Of The Filchered Files
Episode 8: Pelswick On A String
Episode 9: Shall We Dance?
Episode 10: A Rap And A Hard Place

Episode 1: Hear No Evil, P.C. No Evil
Episode 2: Kick Me Kate
Episode 3: Invasion of the Buddy Snatchers
click here to see where to watch