What is Nightmare Cafe about? 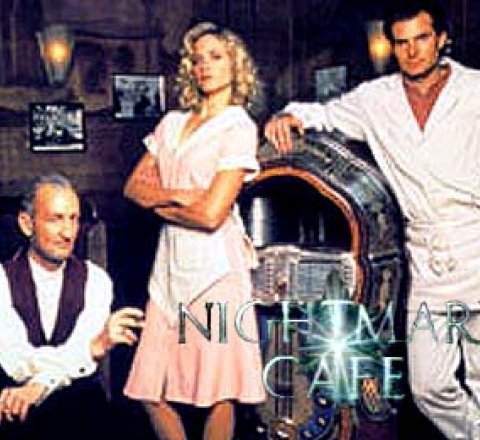 I can't put it any better than Blackie did. "Touch that remote and you die! Now that I've got your attention, here's the deal. See those two people? That's Frank, and that's Fay. Strangers when they met, turns out they've got a lot in common. Both died on the same night, both ended up in the same body of water, and both took refuge in the same all-night cafe. Me, I run the place. Name's Blackie. Been here from the beginning. Now, I know I said Frank and Fay were dead, but the cafe needed a new cook and waitress, so it gave them a second chance at life. They do their job, they get to stick around and help unsuspecting customers turn their lives around. 'Course, anything can happen to those who wander in - their worst nightmares, or their forbidden dreams. Yeah, it all happens here...in this little place we call the Nightmare Cafe."

Episode 1: Nightmare Cafe
Episode 2: Aliens Ate My Lunch
Episode 3: Sanctuary for a Child
Episode 4: The Heart of the Mystery
Episode 5: Dying Well is the Best Revenge
Episode 6: Fay & Ivy
click here to see where to watch