What is Earthworm Jim about? 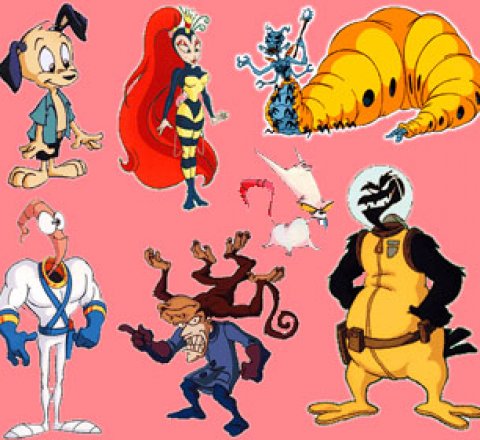 The TV show Earthworm Jim is based on a video game by the same name. As in the video game, our main character is Earthworm Jim, an annelid with a power suit. His best friend is Peter Puppy, a scared doggy, but when Peter gets mad... Let's say you do NOT wanna be in the vicinity. His love interest is the "beautiful" (whether she really is or not depends on whether you're a pro or anti) Princess Whats-Her-Name. The villians are the evil Psycrow (an evil, well, crow.), Evil The Cat (a cat who lives in Heck), Bob & #4 (a goldfish and his very big friend), Queen Pulsating, Bloated, Festering, Sweaty, Pus-Filled, Malformed, Slug-For-A-Butt and others. Our hero must do battle with these creatures, and while he does, he's a master of hilarious quotes. THEME SONG: EARTHWORM JIM! Through soil he did crawl EARTHWORM JIM! A supersuit did fall Jim was just a dirt-eating chewy link of worm flesh but all that came to a crashing end Ahahahahaaa... EARTHWORM JIM!