What is The Misadventures of Sheriff Lobo about? 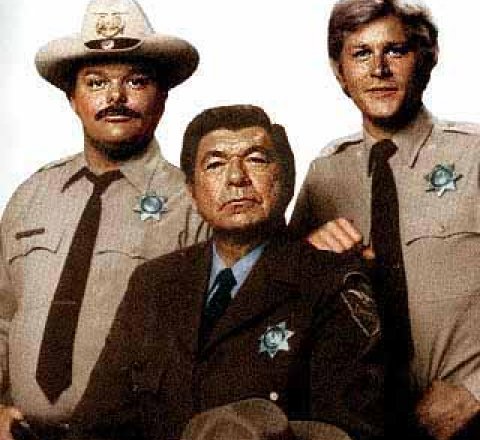 Sheriff Lobo's the corrupt sheriff from Orly County who appeared in several episodes during the first season of "B.J. and the Bear" (1979), as B.J.'s occasional nemesis. He now stars in his own series. He is not as corrupt as he was on B.J.'s show, but he is still trying to make a buck by cooking up schemes or hoping to be given the reward money for property he recovers or criminals he apprehends.

Season 1 of The Misadventures of Sheriff Lobo

Episode : The Day That Shark Ate Lobo
Episode : The Panhandle Pussycats Come To Orly (aka The Big Game)
Episode : Finders Keepers (pt 2) (aka Run For The Money pt 2)
Episode : Finders Keepers (pt 3)
Episode : The Martians Are Coming, the Martians Are Coming (AKA: UFO's Come to Orly)
Episode 1: Dean Martin and the Moonshiners
Episode 2: The Big Game (aka The Panhandle Pussycats Come to Orly)
Episode 3: Disco Fever Comes to Orly
Episode 4: The Mob Comes to Orly
Episode 5: Run for the Money: Part 2 [began on B.J. and the Bear]
Episode 6: Run for the Money: Part 3
Episode 7: Buttercup, Birdie, and Buried Bucks
Episode 8: The Senator Votes Absentee
Episode 9: The Boom Boom Lady
Episode 10: First to Finish, Last to Show
Episode 11: Hail! Hail! the Gang's All Here
Episode 12: The Luck of the Irish
Episode 13: Double Take, Double Take
Episode 14: Police Escort
Episode 15: Who's the Sexiest Girl in the World?
Episode 16: The Martians Are Coming, the Martians Are Coming
Episode 17: The Treasure of Nature Beach
Episode 18: Perkins Bombs Out
Episode 19: Birdie's Hot Wheels
Episode 20: The Haunting of Orly Manor
Episode 21: Mystery on the Orly Express
Episode 22: Orly's Hot Skates

Season 2 of The Misadventures of Sheriff Lobo

Episode 1: The Dirtiest Girls in Town
Episode 2: The Girls with the Stolen Bodies
Episode 3: The Fastest Women Around
Episode 4: Macho Man
Episode 5: Airsick--1981
Episode 6: Coeds with Sticky Fingers
Episode 7: Sex and the Single Cop
Episode 8: Another Day, Another Bomb
Episode 9: The French Follies Caper
Episode 10: Bang Bang, You're Dead
Episode 11: The Cowboy Connection
Episode 12: What're Girls Like You Doing in a Bank Like This?
Episode 13: Lobo and the Pirates
Episode 14: The Roller Disco Karate Kaper
Episode 15: Keep on Buckin'
click here to see where to watch