What is Ballykissangel about? 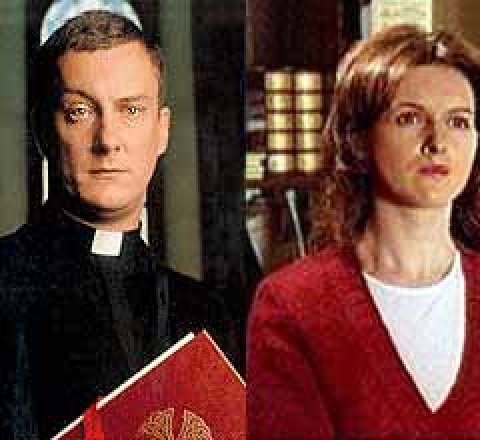 Ballykissangel is one of the best British primetime shows ever seen on British television. The story follows people living in a village called Ballkissangel. Their hopes, fears, romances, mysteries, but mostly very calm stories without criminal acts and somwthing similar are followed by million of viewers. The show was first based on a life of Peter Clifford, a young priest that arrived to Ballykissangel and noone liked him at first, but later turned out to be great while trying to connect to Assumpta Fitzgerald. But, after three seasons, Stephen Thompkins who played Peter leaves the show. Season four starts with new characters of which mostly important is a new priest that replaces Peter, Father Aidan O'Connell who just came out of monastery. The show aired continously by seasons from 1996 to 1999 and went into a break, just to return later in 2001 for one more season. There were 6 seasons and 57 episodes. In 1997 the show also had a Christmas Special Episode.

(watch here)
Episode 1: For One Night Only
Episode 2: River Dance
Episode 3: In the Can
Episode 4: The Facts of Life
Episode 5: Someone to Watch over Me
Episode 6: Only Skin Deep
Episode 7: Money, Money, Money
Episode 8: Chinese Whispers
Episode 9: As Happy as a Turkey on Boxing Day

Episode 1: When a Child Is Born
Episode 2: Changing Times!
Episode 3: Stardust in Your Eyes
Episode 4: The Fortune in Men's Eyes
Episode 5: I Know When I'm Not Wanted
Episode 6: Personal Call
Episode 7: Lost Sheep
Episode 8: The Waiting Game
Episode 9: Pack Up Your Troubles
Episode 10: The Reckoning
Episode 11: Amongst Friends

Episode 1: All Bar One
Episode 2: He Healeth the Sick
Episode 3: Bread and Water
Episode 4: Par for the Course
Episode 5: The Odd Couple
Episode 6: Turf
Episode 7: It's a Family Affair
Episode 8: Rock Bottom
Episode 9: As Stars Look Down
Episode 10: Births, Deaths and Marriages
Episode 11: It's a Man's Life
Episode 12: The Final Frontier

Episode : Getting Better All the Time
Episode 1: God.com
Episode 2: Drink
Episode 3: The Cat and Daddy G
Episode 4: Spirit Proof
Episode 5: Paul Dooley Sleeps with the Fishes
Episode 6: In a Jam
Episode 7: One Reborn Every Minute
Episode 8: Smoke Signals
click here to see where to watch