What is Bones about? 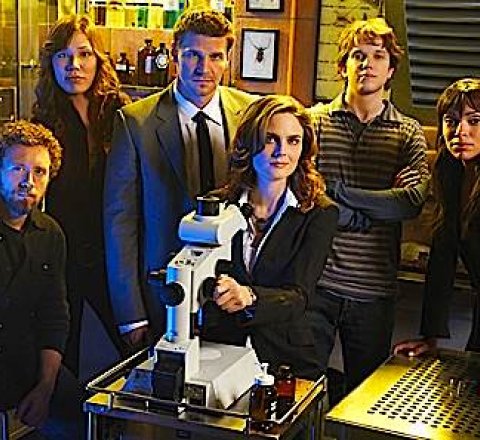 David Boreanaz (Angel, Buffy the Vampire Slayer) stars as F.B.I. Agent Seeley Booth, who teams up with forensic anthropologist Dr. Temperance "Bones" Brennan (Emily Deschanel) to solve some of the most baffling and bizarre crimes ever. Booth depends on clues from the living, witnesses and suspects, while Brennan gathers evidence from the dead, relying on her uncanny ability to read clues left behind in the bones of the victims. Their different investigative styles cause the two to frequently clash, creating an undeniable chemistry and just the right touch of dark humor. Inspired by real-life forensic anthropologist Kathy Reichs and state-of-the-art criminal investigation procedures, Bones is compelling, cutting-edge television.

(watch here)
Episode : Man in the Outhouse
Episode : Mayhem on a Cross
Episode 1: Yanks in the U.K. (1)
Episode 2: Yanks in the U.K. (2)
Episode 3: The Man in the Outhouse
Episode 4: The Finger in the Nest
Episode 5: The Perfect Pieces in the Purple Pond
Episode 6: The Crank in the Shaft
Episode 7: The He in the She
Episode 8: The Skull in the Sculpture
Episode 9: The Con Man in the Meth Lab
Episode 10: The Passenger in the Oven
Episode 11: The Bone That Blew
Episode 12: Double Trouble in the Panhandle
Episode 13: Fire in the Ice
Episode 14: The Hero in the Hold
Episode 15: The Princess and the Pear
Episode 16: The Bones That Foam
Episode 17: The Salt in the Wounds
Episode 18: The Doctor in the Den
Episode 19: The Science in the Physicist
Episode 20: The Cinderella in the Cardboard
Episode 21: Mayhem on the Cross
Episode 22: The Double Death of the Dearly Departed
Episode 23: The Girl in the Mask
Episode 24: The Beaver in the Otter
Episode 25: The Critic in the Cabernet
Episode 26: The End in the Beginning   (watch here)

(watch here)
Episode 1: Harbingers in the Fountain
Episode 2: The Bond in the Boot
Episode 3: The Plain in the Prodigy
Episode 4: The Beautiful Day in the Neighborhood
Episode 5: A Night at the Bones Museum
Episode 6: The Tough Man in the Tender Chicken
Episode 7: The Dwarf in the Dirt
Episode 8: The Foot in the Foreclosure
Episode 9: The Gamer in the Grease
Episode 10: The Goop on the Girl
Episode 11: The X in the File
Episode 12: The Proof in the Pudding
Episode 13: The Dentist in the Ditch
Episode 14: The Devil in the Details
Episode 15: The Bones on a Blue Line
Episode 16: The Parts in the Sum of the Whole
Episode 17: The Death of the Queen Bee
Episode 18: The Predator in the Pool
Episode 19: The Rocker in the Rinse Cycle
Episode 20: The Witch in the Wardrobe
Episode 21: The Boy with the Answer
Episode 22: The Beginning in the End

Episode 1: The Mastodon in the Room
Episode 2: The Couple in the Cave
Episode 3: The Maggots in the Meathead
Episode 4: The Body and the Bounty
Episode 5: The Bones That Weren't
Episode 6: The Shallow in the Deep
Episode 7: The Babe in the Bar
Episode 8: The Twisted Bones in the Melted Truck
Episode 9: The Doctor in the Photo
Episode 10: The Body in the Bag
Episode 11: The Bullet in the Brain
Episode 12: The Sin in the Sisterhood
Episode 13: The Daredevil in the Mold
Episode 14: The Bikini in the Soup
Episode 15: The Killer in the Crosshairs
Episode 16: The Blackout in the Blizzard
Episode 17: The Feet on the Beach
Episode 18: The Truth in the Myth
Episode 19: The Finder
Episode 20: The Pinocchio in the Planter
Episode 21: The Signs in the Silence
Episode 22: The Hole in the Heart
Episode 23: The Change in the Game

Strange Hero Yi Zhi Mei
Making The Most Of The Micro
Rhodes Across The Caribbean
How Do You Want Me?
Trust Me (2009)
Wordplay
Not on Your Nellie
Watch TV Series
Watch Movies
Paid TV sites
Privacy Policy
Watch Bones online