What is FullMetal Alchemist about? 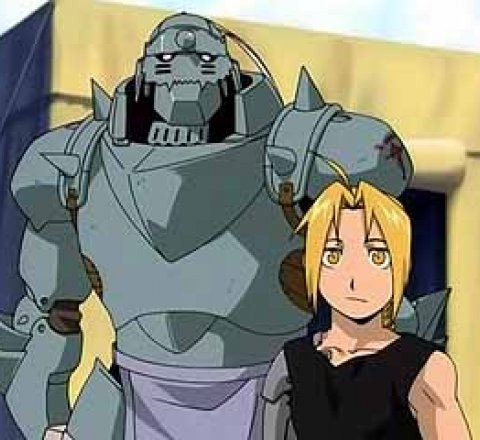 "Humankind cannot gain anything without first giving something in return. To obtain, something of equal value must be lost. That is Alchemy's first law of Equivalent Exchange. In those days, we really believed that to be the world's one, and only, truth." -Alphonse Elric Edward and Alphonse Elric are two brothers gifted with the ability of alchemy, the science of taking one thing and changing it into another. However, alchemy works on the theory of Equivalent Exchange -- for something to be created, something else of equal value must be sacrificed. When their mother dies, Edward decides to do the unthinkable -- bringing her back to life by breaking one of Alchemy's biggest taboos and performing Human Alchemy. Thinking they have nothing more to lose, he and Alphonse make their attempt -- but something goes horribly wrong. In the process, Alphonse loses his body and Edward loses his leg. Ed manages to save Al by attaching his spirit to a suit of armor, but at the cost of his arm and leg.

Episode : Transmutation of Love
Episode : Dash! Automail
Episode : The State Alchemist Certification Examination
Episode : The Dog of the Military's Silver Watch
Episode : The Phantom Thief Psiren
Episode : Flame vs. Fullmetal
Episode : The Right Hand of Destruction
Episode 1: To Challenge the Sun
Episode 2: Body of the Sanctioned
Episode 3: Mother
Episode 4: A Forger's Love
Episode 5: The Man with the Mechanical Arm
Episode 6: The Alchemy Exam
Episode 7: Night of the Chimera's Cry
Episode 8: The Philosopher's Stone
Episode 9: Be Thou for the People
Episode 10: The Phantom Thief
Episode 11: The Other Brothers Elric (1)
Episode 12: The Other Brothers Elric (2)
Episode 13: Fullmetal vs. Flame
Episode 14: Destruction's Right Hand
Episode 15: The Ishbal Massacre
Episode 16: That Which Is Lost
Episode 17: House of the Waiting Family
Episode 18: Marcoh's Notes
Episode 19: The Truth Behind Truths
Episode 20: Soul of the Guardian
Episode 21: The Red Glow
Episode 22: Created Human
Episode 23: Heart of Steel
Episode 24: Bonding Memories
Episode 25: Words of Farewell
Episode 26: Her Reason
Episode 27: Teacher
Episode 28: One is All, All is One
Episode 29: The Untainted Child
Episode 30: Assault on South Headquarters
Episode 31: Sin
Episode 32: Dante of the Deep Wood
Episode 33: Al, Captured
Episode 34: Theory of Avarice
Episode 35: Reunion of the Fallen
Episode 36: The Sinner Within Me
Episode 37: The Flame Alchemist, The Bachelor Lieutenant, & The Mystery of Warehouse 13
Episode 38: With the River's Flow
Episode 39: Secret of Ishbal
Episode 40: The Scar
Episode 41: Holy Mother
Episode 42: His Name is Unknown
Episode 43: The Stray Dog
Episode 44: Hohenheim of Light
Episode 45: One Who Lets Her Heart Rot
Episode 46: Human Transmutation
Episode 47: Homunculus Sealed
Episode 48: Farewell
Episode 49: Beyond the Gate
Episode 50: Death
Episode 51: Laws and Promises