What is Mission Hill about? 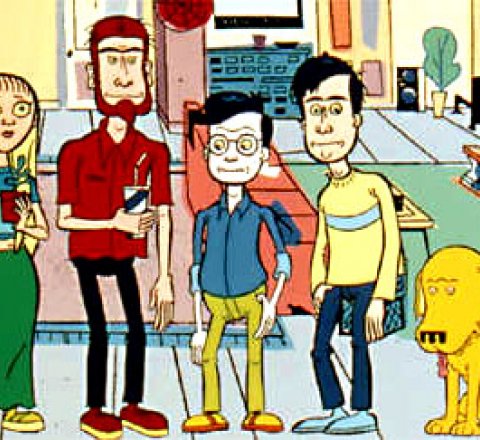 Mission Hill revolves around Andy French, a 24-year-old charmingly lazy guy, and his nerdy teenage brother Kevin who moves into Andy's big city loft. These two couldn't be more opposite: Andy can never seem to settle on a particular job or girlfriend, while straight-A Kevin never gets a B or a girlfriend." "The show takes place in the fictional city of Cosmopolis's equally fictional neighborhood of Mission Hill. It's a hip place full of diverse, colorful characters -- think Silver Lake in Los Angeles, Wicker Park in Chicago or Williamsburg in Brooklyn. Regulars also include Posey Tyler, the whimsical roommate who hides a secret dark side, and Andy's mellow best friend Jim Kuback who's well-connected to the hip downtown scene. Across the hall are Natalie, Carlos and their baby, who are, respectively, a painter, a professor and an infant. Next door are Gus and Wally, a gay couple in their 60s given to loud fights and loud making up." (msnhill.com press release) Picked

Episode 1: Pilot (or The Douchebag Aspect)
Episode 2: Kevin's Problem (or Porno for Pyro)
Episode 3: Andy and Kevin Make a Friend (or One Bang for Two Brothers)
Episode 4: Kevin vs. the SAT (or Nocturnal Admissions)
Episode 5: Andy Gets a Promotion (or How to Get Head in Business Without Really Trying)
Episode 6: Unemployment Part 1 (or Brother's Big Boner)
Episode 7: Unemployment Part 2 (or Theory of the Leisure Ass)
Episode 8: Andy Joins the PTA (or Great Sexpectations)
Episode 9: Andy vs. The Real World (or The Big-Ass Viacom Lawsuit)
Episode 10: Kevin Finds Love (or Hot for Weirdie)
Episode 11: Stories of Hope and Forgiveness (or Day of the Jackass)
Episode 12: Happy Birthday, Kevin (or Happy Birthday, Douchebag)
Episode 13: Planet 9 from Mission Hill (or I Married a Gay Man from Outer Space)
click here to see where to watch