What is Almost Perfect about? 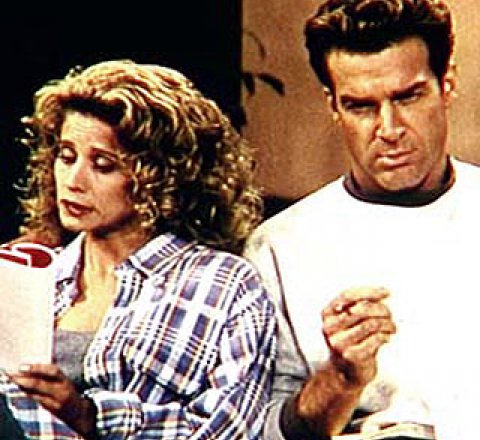 Based, in part, on the life of co-creator Robin Schiff, Almost Perfect centered around high-strung Kim Cooper and laid-back Mike Ryan. Kim, a writer for a police show called Blue Justice, found herself at the top of her game after being promoted to showrunner. Mike, meanwhile, was a hotshot district attorney. Like all great odd couples, sparks flew the moment they met, and they soon were an item. The relationship and the promotion would have made it truly perfect for Kim -- if not for one thing. How to juggle a heavy workload and maintain a healthy sex life? Offering occasional support for them were the Blue Justice writing staff -- neurotic yuppie Gary Karp; burnt-out eccentric Neal Luder; and naive, boyish Rob Paley. Entertainment president told to make "young, hip, edgy" shows, or else. Entertainment president makes "young, hip, edgy" shows. Entertainment president gets canned anyway. New regime comes in. New regime doesn't want any of former entertainment president's

Episode 1: The Break-Up
Episode 2: Shelf Doubt
Episode 3: Good Grief
Episode 4: Heaven's Helper
Episode 5: Dating for Ratings
Episode 6: Where No Woman Has Gone Before
Episode 7: K.I.S.S.
Episode 8: Gimme Shelter
Episode 9: The Laws
Episode 10: This Is What Happens When You Don't Watch PBS
click here to see where to watch