What is The Jamie Foxx Show about? 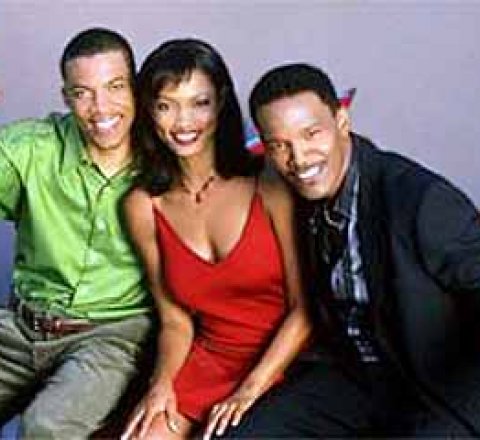 Texas native Jamie King (Jamie Foxx, "In Living Color") is an aspiring actor who heads to Hollywood in hopes to find fame and fortune in the entertainment industry. To support himself, he works at his Aunt Helen (Ellia English) and Uncle Junior's (Garrett Morris, "Martin") Los Angeles hotel, the King's Towers. On the job, he annoys co-worker Braxton P. Hartnabrig (Christopher B. Duncan), the up-tight accountant, and tries to win the attention of gorgeous desk clerk, Francesca "Fancy" Monroe (Garcelle Beauvais-Nilon, "NYPD Blue", "Opposite Sex"), who has made it clear that she is not interested in an office romance. Nevertheless, Jamie is determined to maintain his skills as an entertainer and move into the limelight. After starting out as a member of the "In Living Color" troupe, Foxx stars in his own show that was the WB's highest-rated series for the 1996-1997 season. First Telecast: August 28, 1996 Last Telecast: January 14, 2001 Episodes: 100 Color Episodes

Season 1 of The Jamie Foxx Show

Season 2 of The Jamie Foxx Show

Season 3 of The Jamie Foxx Show

Season 4 of The Jamie Foxx Show

Season 5 of The Jamie Foxx Show

Episode 1: On Bended Knee
Episode 2: Double or Nothing
Episode 3: Serve No Wine Before I Get Mine
Episode 4: Shades of Gray
Episode 5: I'll Do It My Dammy.com
Episode 6: Candy Girl
Episode 7: Shakin' and Fakin'
Episode 8: If the Shoe Fits...
Episode 9: Cupid
Episode 10: Bachelor Party
Episode 11: East Side Story
Episode 12: Episode 100: Always and Forever (a.k.a. Happily Ever After)
click here to see where to watch