What is Kenny the Shark about? 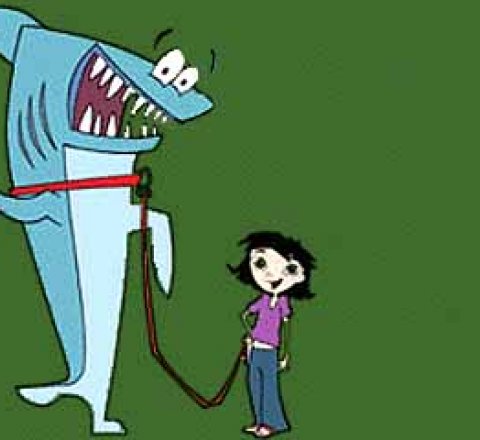 Kenny is a tiger shark who has found himself in the strange position of being a family pet. Kenny has all the characteristics and instincts of any other tiger shark, but he must adapt himself to the placid ways of suburban family life. If not, he'll be put back out to sea, which would mean giving up his best friend Kat. And that would be unthinkable! Kenny is about an 8-foot, 1,500-pound tiger shark who lives with 10-year-old Kay and her family in the suburbs. Her parents are tolerant of Kenny, but he's big and smelly. Luckily, Kat speaks shark, so she tries to reason with Kenny when he wants to eat the mail or mail carrier. If Kenny can't adapt to life under a roof, he'll have to go back to the sea. Kat learns that living with a shark isn't that easy since they eat everything, they never sleep and they constantly shed their teeth. To stay best friends with, Kenny must fight his natural carvings, making do with imitation seal flakes and resisting the desire to eat Kat's baby brother, w

Season 1 of Kenny the Shark

Season 2 of Kenny the Shark