What is The Oblongs about? 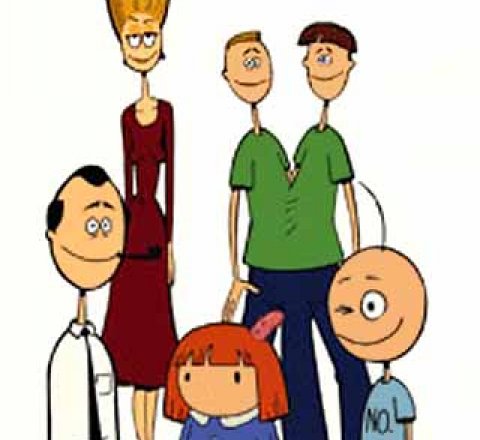 The tight-knit Oblong clan lives in Hill Valley, a toxic valley downstream from your typical industrial waste site, which has caused a variety of bizarre physical and emotional abnormalities. At the head of the dinner table is the loving, limbless, tirelessly upbeat patriarch Bob Oblong and his adoring, alcohol-and-tobacco-addicted, bald-but-beautifully-wigged wife Pickles, who frequents the Rusty Bucket bar, owned by transexual Anita Bidet (who was originally to be named Sofonda Cox!). The family includes their conjoined twin sons Biff and Chip, who share three legs and three buttocks, but can't seem to agree on anything; sweet, tattling, 4-year-old daughter Beth, sporting a cucumber-like growth sprouting from her head; and youngest son Milo, a one-haired optimist who has every childhood emotional disorder and behavioral problem ever diagnosed. Other members of the family include Bob's mother, Grammy, who's a vegetable; Milo's narcoleptic scottie dog, Scottie; and the chain-smoki

Extras
Episode 1: It's an Oblong World
Episode 2: The Art of the Oblongs
Episode 3: An Oblong Picture Book
Episode 4: Story of the Creator and Actors
Episode 5: 'This Is Helga' Short

Season 1 of The Oblongs

Season 2 of The Oblongs