What is Brothers about? 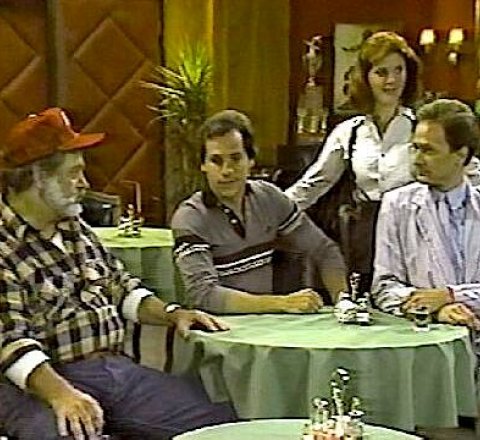 Lou, Joe, and Cliff Waters are three brothers living in south Philadelphia. The older brothers receive the shock of their lives when youngest brother Cliff runs away from the altar on what is supposed to be his wedding day. His reason: he's gay. Lou is the oldest and a construction worker. He insists that someone talked Cliff into being a homosexual. Middle brother Joe is a former pro football player who runs a restaurant, is overprotective of teenage daughter Penny, and tries to maintain peace between his two brothers. Cliff is the youngest brother. He frequently finds himself in arguments with his brothers and with his best friend, flamboyantly gay writer/editor Donald Maltby.

Episode : The Fourth Ball
Episode : It Ain't Over Till It's Over
Episode : Godzilla Meets Bambi
Episode : The Shoop Shoop Shop
Episode 1: AN AFFAIR TO REMEMBER
Episode 2: YOUR BROTHER'S KEEPER
Episode 3: THE FOURTH BALL (aka Lucky Charm)
Episode 4: LIFE'S TOO SHORT TO BE DELICATE
Episode 5: LET THE EAGLE FLY
Episode 6: THE GIRL MOST LIKELY
Episode 7: DONALD'S DAD
Episode 8: DONALD'S OLD FLAME
Episode 9: THE PROOF IS IN THE PJs
Episode 10: A HOUSE DIVIDED
Episode 11: THE STING
Episode 12: HAPPY BIRTHDAY, BABY BROTHER
Episode 13: TO PLAY OR NOT TO PLAY
Episode 14: THE GREATEST STORY NEVER TOLD
Episode 15: AMONGST MY SOUVENIRS
Episode 16: RHINO RHAPSODY
Episode 17: DONALD'S AIR FORCE BLUES
Episode 18: THE STRANGER
Episode 19: IT AIN'T OVER TIL IT'S OVER
Episode 20: FATHER, FATHER
Episode 21: A GREASEPAINT SMILE
Episode 22: GOBBA, GOBBA
Episode 23: GODZILLA MEETS BAMBI (aka Donald's Apartment)
Episode 24: A CARNATION BY ANY OTHER NAME
Episode 25: THE SHOOP SHOOP SHOP (aka Isle Of Lesbos)

Episode : I Remember But I Don't Like It
Episode 1: SITTIN' IN A TREE
Episode 2: BARNEY, WE HARDLY KNEW YE
Episode 3: I'LL KNOW WHEN MY LOVE COMES ALONG
Episode 4: L. A. MALTBY
Episode 5: HUSTLE UP
Episode 6: BUT I KNOW WHAT I LIKE
Episode 7: MOVING OUT
Episode 8: A JOB WELL DONE
Episode 9: TWO FOR THE SEESAW
Episode 10: NOTHIN' SAYS LOVIN'
Episode 11: THE DETOUR
Episode 12: GUARDIAN ANGELS
Episode 13: A STUDY IN MALTBY
Episode 14: NANNY FROM HEAVEN
Episode 15: THE POINT AFTER BOWLING TEAM
Episode 16: ISN'T IT ROMANTIC?
Episode 17: THREE INFANTS AND A BABY
Episode 18: GUARDING THE NEST
Episode 19: SAM'S DAD
Episode 20: INHERIT THE BAR
Episode 21: FANTASY IN EBONY
Episode 22: BIG
Episode 23: SOMETHING OLD, SOMETHING NEW
Episode 24: WOULDN'T IT BE NICE
Episode 25: THE ROAD YET TAKEN
Episode 26: I REMEMBER BUT I DON'T LIKE IT (Compilation Show)
click here to see where to watch