What is Work It about? 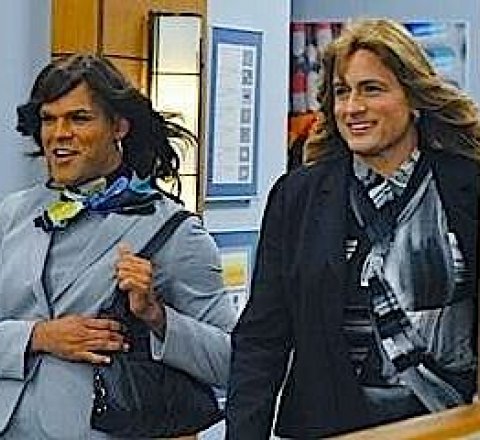 This high-concept comedy centers on two unrepentant guy's guys who, unable to find work, dress as women to get jobs as pharmaceutical reps. Not only do they pull it off, but they might just learn to be better men in the process. With unemployment an ongoing issue and women now outnumbering men in the workforce, the new comedy series "Work It" follows two alpha males who realize the only way to beat the current "mancession" and land a job in pharmaceutical sales is to pass themselves off as women. Combining all the best elements of the workplace comedy, the buddy comedy and the family comedy, "Work It" centers on Lee Standish (Ben Koldyke) -- a quick-witted and likable family man who used to be a top car salesman until he got laid off -- and Angel Ortiz (Amaury Nolasco) -- a single, hot-headed ladies' man with no filter -- who quickly learn there are fundamental differences in the worlds of men and women that go beyond teetering in high heels and tightening up with Spanx. Lee and Angel are determined to keep their ruse going for as long as they can -- and keep their newly found jobs - in this smart, funny and relevant look at male and female relationships at work, at home and socially. Being a better man sometimes means having to be a better woman.

Season 1 of Work It