What is The Hard Times of RJ Berger about? 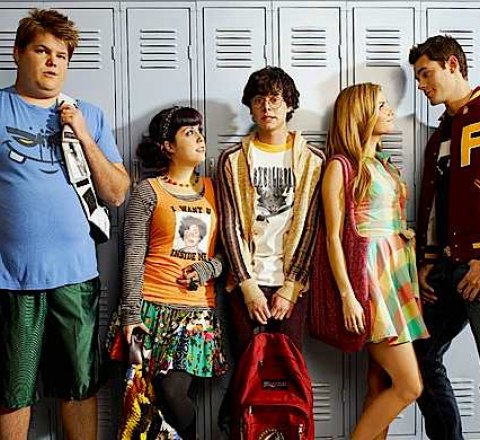 The Hard Times of RJ Berger is an American television comedy series created by David Katzenberg and Seth Grahame-Smith for MTV. The show's central character is RJ Berger (Paul Iacono), an unpopular sophomore at the fictional Pinkerton High School in Ohio. Berger's two best friends are Miles Jenner (Jareb Dauplaise), whose ambitions for popularity cause him to clash with Berger, and Lily Miran (Kara Taitz), who has been lusting after Berger for several years. Berger's love interest is Jenny Swanson (Amber Lancaster), a "girl next door" who is involved with Max Owens (Jayson Blair), a popular jock and bully. The show is presented as a coming of age story and has been described by Katzenberg and Grahame-Smith as a blend of the television series The Wonder Years and the film Superbad. The pilot episode premiered on June 6, 2010, and the first season of 12 episodes concluded August 23, 2010. MTV renewed the series for a second season, which premiered on March 24, 2011.

Extras
Episode 1: Behind the Scenes

Season 1 of The Hard Times of RJ Berger

Season 2 of The Hard Times of RJ Berger