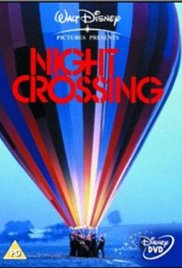 Where to watch Night Crossing
In 1978 in East Germany two families, the Strelzyks and the Wetzels,make plans to escape the Communist East and flee to the West. Peter Strelzyk comes up with a daring idea to construct a homemade air balloon big enough to carry the two families across the East-West militarized border. The border between East and West Germany is heavily militarized, complete with watch towers, guard dogs, barbed-wire, alarms, sensors, search lights and patrols. Rumors have it that some areas of the militarized border are mined. The only chance of crossing the border is by air. The Strelzyks and the Wetzels commence their risky venture by purchasing lots of taffeta fabric and sewing it together with a sewing machine in the attic. Peter Strelzyk builds an experimental homemade hot air balloon burner. In 1979 when the balloon is ready Peter and his son test it but the Wetzel family becomes hesitant. The Strelzyks decide to go alone but bad weather causes the balloon to crash inside the Communist zone. ... Written bynufs68