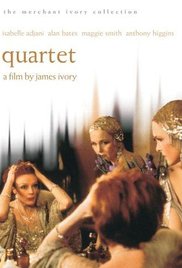 Where to watch Quartet
It's 1927 Paris. Following the conviction of her art dealer husband, Stephan Zelli, for theft for which he was handed a one-year prison sentence, Marya Zelli, originally from West India, moves in with her acquaintances, expatriate Brits H.J. and Lois Heidler. Marya knows that H.J. in particular has more in mind than just providing her lodging out of the goodness of his heart. From behind bars, Stephan encourages Marya to move in with them not knowing H.J.'s intentions. Marya agrees in part because she, being a foreigner, cannot get work and would thus become destitute otherwise. She learns she is the latest in a long line of lodgers. She also learns that H.J. and Lois' marriage is not all that it appears on the surface. The Heidler's hold on Marya becomes stronger when they convince her that Stephan not only has no money but has no future in France after his release. Their collective lives become more complicated when Stephan is released from jail and tries to figure out what he's ... Written byHuggo

"Abandoned in Paris with no work permit and no savings, when her art-dealing (illegal) Polish husband is sent to prison, Marya Zelli (Isabelle Adjani) accepts the hospitality of the Heidlers, Lois and H"