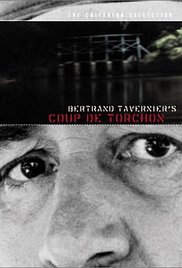 Where to watch Coup de torchon (Clean Slate)
1938, in a French african colony. Lucien Cordier is the cop of this village, populated with blacks and a few whites (usually racialist and lustful). He is a washout, everyone (including his wife Huguette) humiliates him. He never arrests anyone and looks at elsewhere when a dirty trick occurs. But one day, he turns into a machiavellian exterminating angel. Written byYepok

" After suffering the indignities of a natural born doormat all his life, he strikes back with a vengeance, slowly descending into a rational madness that commands sympathy while simultaneously provoking moral outrage (at one point he callously murders the innocent native servant who mistakenly witnessed on of his killings)"