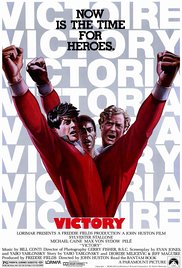 Where to watch Victory (a.k.a. Escape to Victory)
In World War II, a group of Nazi officers come up with a propaganda event in which an all star Nazi team will play a team composed of Allied Prisoners of War in a Soccer (Football) game. The Prisoners agree, planning on using the game as a means of escape from the camp. Written byJohn Vogel <jlvogel@comcast.net>

" As a War film it is only average, but as a Football spectacle it is very interesting"

Victory (a.k.a. Escape to Victory) trailer