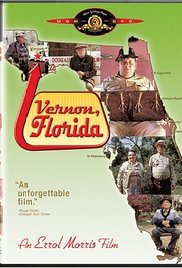 Where to watch Vernon, Florida
Early Errol Morris documentary intersplices random chatter he captured on film of the genuinely eccentric residents of Vernon, Florida. A few examples? The preacher giving a sermon on the definition of the word "Therefore," and the obsessive turkey hunter who speaks reverentially of the "gobblers" he likes to track down and kill. Written byMark Toscano <fiddybop@uclink4.berkeley.edu>

"this sets the tone for the entire picture"