Watch This Is Elvis online 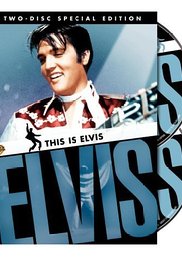 Where to watch This Is Elvis
Though several actors portray Elvis Presley at different stages of his life, this documentary is comprised mostly of actual performance footage and interviews with Elvis, his fans and those close to him. His arrival on the national scene ,in 1956, is highlighted by clips from "Stage Show", "The Milton Berle Show" and "The Ed Sullivan Show". Scenes from several of his 33 films are highlighted including his screen debut in "Love Me Tender" (1956) and the critically acclaimed "King "Creole"(1958), his last film prior to a 2 year hitch in the military. From 1960-68 he kept busy by making films and soundtrack albums, as well as some Gospal albums. After an absence of almost 9 years from live performing, Elvis returned in 1968 to do a TV Special titled "Elvis" and in 1969 performed in Las Vegas for the first time since 1956. His Vegas appearances, along with his nation wide concert tours, continued for the remainder of his career. A clip from his 1973 TV Special,"Elvis Aloa", is featured. ... Written byefffee@aol.com

" You get to see Elvis' bedroom and even get a look at the bathroom, though from a distance"

This Is Elvis trailer