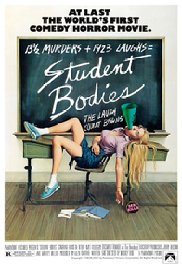 Where to watch Student Bodies
A killer named the Breather terrorizes students at a high school. Whenever the killer finds students having sex, he kills them. He has some intense issues with which to deal. He likes to breathe heavily, and he likes to make prank calls while talking through a rubber chicken. Written byJosh Pasnak <chainsaw@intouch.bc.ca>