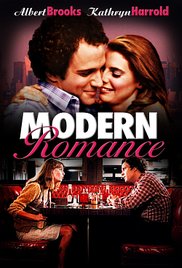 Where to watch Modern Romance
Robert Cole, a film editor, is constantly breaking up with and reconciling with long-suffering girl friend Mary Harvard, who works at a bank. He is irrationally jealous and self-centered, while Mary has been too willing to let him get away with his disruptive antics. Can they learn to live with each other? Can they learn to live without each other? The movie also provides insight into film editing as Robert and co-worker Jay work on their current project, a cheesy sci-fi movie. Written byReid Gagle