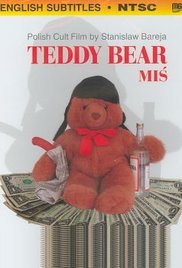 Where to watch Teddy Bear (Mis)
The main character is the manager of a sport club, nicknamed "Teddy Bear" by his friends and acquaintances. One day he is detained at the border just as his sport team is off to a tournament - somebody has torn out a few pages from his passport. It occurs to him that perhaps his ex-wife has done so to get her hands on their joint account in a London bank. Therefore, he has to get to London as soon as possible in order to transfer the money to a different bank. The solution is a movie, made by his friend. The script requires a double role, thus the search for a character is announced. The double has to apply for the passport, and that is solved through a girlfriend who agrees to play dope's new fiancée. At the engagement party he is slipped a drug, and Teddy Bear runs off to the airport with the false passport. On the plane, however, he meets his ex-wife... Written byPolish Cinema Database <http://info.fuw.edu.pl/Filmy/>