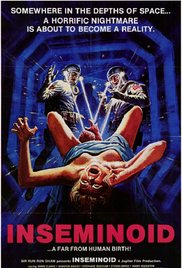 Where to watch Horror Planet (a.k.a. Inseminoid)
A group of scientists are working in a lab located on a distant planet. One of them, Sandy, is attacked, raped and impregnated by a monstrous creature. She then begins to stalk her colleagues one by one, killing them and drinking their blood. Written byMarty McKee <mmckee@soltec.net>