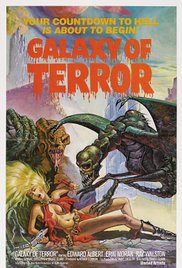 Where to watch Galaxy of Terror (Quest)
A spacecraft travels to a distant planet to rescue the crew of another spaceship that crashed, but their own craft, damaged in the landing, needs repair. Baelon commands the rescue team formed of his rival Cabren, Alluma, Dameia, Quuhod and the rookie Cos. While looking for but not finding survivors from the former expedition, Cos is murdered; however, they cannot leave the planet due to a projected electromagnetic field. Commander Ilvar joins the team to search for the cause of the interference, while Captain Trantor, technician Ranger and cook Kore stay in the craft. One by one, rescue team members are killed in weird situations materialized from their own fears by an ancient alien pyramid. Written byClaudio Carvalho, Rio de Janeiro, Brazil / revised by statmanjeff

"I loved this film"