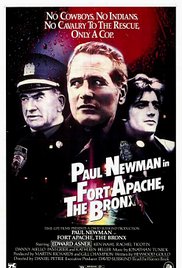 Where to watch Fort Apache, the Bronx
From the sight of a police officer this movie depicts the life in New York's infamous South Bronx. In the center is "Fort Apache", as the officers call their police station, which really seems like an outpost in enemy's country. The story follows officer Murphy, who seems to be a tuff cynic, but in truth he's a moralist with a sense for justice. Written byTom Zoerner <Tom.Zoerner@informatik.uni-erlangen.de>