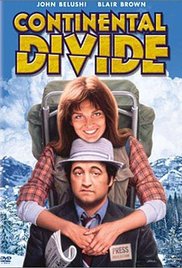 Where to watch Continental Divide
Ernie Souchak (John Belushi), a tough Chicago reporter, gets a little too close to the Mob, and is assaulted by two crooked police officers sent by a crooked councilman, and ends up in the hospital. To take the heat off of him, his editor sends him to Colorado to investigate an eagle researcher ('Blair Brown'). Sparring partners at first, the pair eventually fall in love, but Souchak must return to Chicago when one of his sources is mysteriously killed. Written byRay Hamel <hamel@primate.wisc.edu>

" BE WARNED, however I first saw this film after Belushi's death and found his character's frequent references to death disturbing"