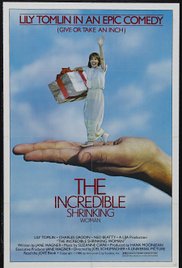 Where to watch The Incredible Shrinking Woman
After being exposed to a bizarre mixture of household chemicals, Pat Kramer begins to shrink. This baffles scientists, makes parenting difficult, warms the hearts of Americans, and captures the attention of a group of people who want to take over the world. This evil group plots to kidnap Pat and perform experiments on her so that they can eventually shrink everyone. Written byDave Smith <dave@stat.colostate.edu>