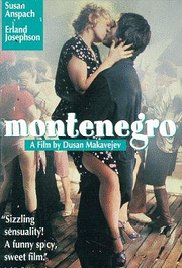 Where to watch Montenegro
Marilyn Jordan, an American, lives in Stockholm with her Swedish husband and family. Her behavior is bizarre, perhaps mad: she poisons the dog's milk and advises the dog not to drink it; she sets the sheets afire as her husband sleeps; she crawls under the dining table to sing. While detained at airport customs for carrying pruning shears, she meets a young Yugoslav woman and goes with her to a Gypsy enclave where she's fought over, takes a lover, helps with the sordid entertainment at a bar, and returns home more dangerous than before. The film also tells parallel stories of Marilyn's daughter becoming a junior homemaker as the young immigrant practices her striptease. Written by<jhailey@hotmail.com>

" All sorts of social commentaries can be concluded about this movie, but having owned a copy of the film and viewing it on numerous occasions, each screening presents a different interpretation"