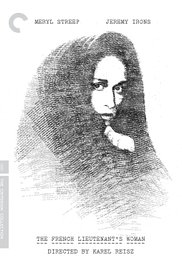 Where to watch The French Lieutenant's Woman
A film is being made of a story, set in 19th century England, about Charles, a biologist who's engaged to be married, but who falls in love with outcast Sarah, whose melancholy makes her leave him after a short, but passionate affair. Anna and Mike, who play the characters of Sarah and Charles, go, during the shooting of the film, through a relationship that runs parallel to that of their characters. Written byLeon Wolters <wolters@strw.LeidenUniv.nl>