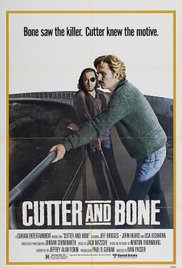 Where to watch Cutter's Way
Alex Cutter (John Heard) came back from the war minus an eye, a leg and an arm. He drinks a lot and abuses his wife, who also drinks a lot. Richard Bone (Jeff Bridges) is a friend who witnesses a murder. From this point John is "after" the killer, alongside the diseased sister, while Jeff doesn't really want to get involved in it. Written byJonathan <jrd@netvision.net.il>