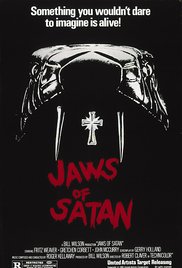 Where to watch Jaws of Satan
A preacher whose ancestors were cursed by Druids battles Satan, who has taken the form of a huge snake.