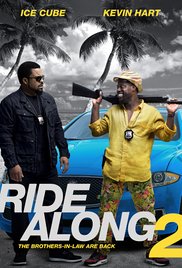 Where to watch Ride Along 2
The RIDE ALONG 2 sequel picks up about a year after our heroes' last adventure. Plans for a quick trip to Miami go bad. With the wedding upcoming, James reluctantly takes Ben with him to Miami to follow up on a lead connected to a drug ring case he's been trying to crack. In Miami, they meet Maya, a no-BS homicide detective who lets them know Miami is her turf. They also encounter AJ, a shady cocky computer hacker who reveals evidence that implicates a well-respected local businessman, the wealthy Antonio Pope. Pope harbors a vicious streak and rules South Florida's drug trade. If Ben and James can convince the authorities that Pope is a brutal crime boss they'll stop his spree. If they fail, well there may not be a wedding after all. Written byDeAlan Wilson www.ComedyE.com

" But it will make you laugh and that's a good thing"